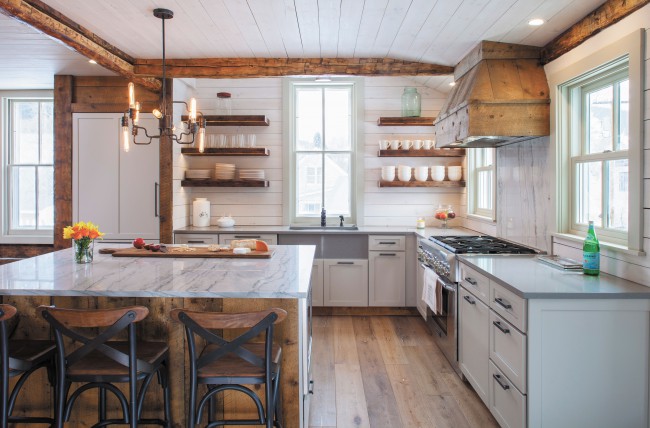 One of Crested Butte’s first hotels gets award-winning renovation

At the top of a gentle rise on Sopris Avenue, between Third and Fourth streets, there’s a house that for years was known as the Spehar house for the family who owned it for almost 90 years. And on a street lined with low-hung bungalows, their home cut a unique profile.

The surrounding houses are set back behind picket fences with narrow walkways leading to front porches, while the Spehar house hangs over the street like a canyon wall. For its prominence and the yellow steel siding it sported for 40-odd years, the Spehar house was a landmark in Crested Butte.

“People called it the yellow house on the hill,” Teri O’Rourke says, scanning old photographs of the house.

O’Rourke, who bought the property to renovate in 2015 with her husband Peter and partners Jeff Hermanson and interior designer Priscila Palhava of Studio West, always knew the siding would have to go. But she had no idea how much history that would uncover. “We didn’t even know it was log underneath,” she says.

When the O’Rourkes first walked into the property, they were only seeing the final sentences of the home’s latest chapter. The history of the house, she discovered, is as old as the town around it. Their opportunity was to preserve that history and bind it with new pages for the next chapter.

In her research, O’Rourke learned that the building was built by Howard F. Smith and William Holt, two of Crested Butte’s founding fathers, who opened it as the Pioneer Apartment Hotel in 1881. At the time it was a modest, two-story structure meant to be the more affordable alternative to the Elk Mountain House, which Smith and Holt opened around the corner on Fourth and Elk the same year, she says.

The Pioneer Apartment Hotel operated as one of Crested Butte’s first hotels until George and Anna Spehar bought the property sometime before the 1920 census, which lists them as the residents. When George and Anna died, they left the house to their son, George Jr., who in turn left it to his daughter Betty who was born there in 1924.

After going away to college and eventually earning her PhD, Betty moved back to the family home in 1952 to teach English and Literature at Western State. And in the years that followed she became as much a fixture in town as the house she lived in.

When Betty passed away in 2009, she left the house to the next generation of Spehar, who had spread out around the globe. Jim Spehar, who is now around 70 and lives in Grand Junction, started visiting the family home on Sopris when he was still in diapers and remembers it “about three color changes ago,” he says. His parents were married in Crested Butte and while his father was a Spehar, his mother’s family had been in the valley since the 1880s. So his family’s ties to the town and the house were strong.

“[Betty] left the house to me and my five siblings,” he says. “We kept it for a few years and were actually about to embark on some improvement projects.”

They started to install a stairwell when they got a call from a realtor who had a few interested parties who wanted to look at the house. The timing of the call proved fateful. One of the parties included Teri and Peter O’Rourke, who had 30 years of experience building new and renovating historic buildings in Crested Butte, and they knew they’d found something unique. It was a risk not knowing what was under the yellow steel siding, but the team made an offer anyway.

“It was a hard decision to make,” Jim Spehar says of the sale. “But we were going to do a fairly modest remodel and nothing to the extent that’s been done.”

The renovation was a major one, O’Rourke says, and would have been an enormous task for anyone without experience reconstructing a historic building. Even they didn’t know quite what they were getting into. When they first saw the house, they noticed the thickness of the walls and guessed they were made of logs. “We thought, ‘Oh my God,’” O’Rourke says. “It better be really good log because if it’s rotten and awful then what do we do?”

There were two live wires running through insulating plugs on the ceiling, “the old way,” Peter O’Rourke says. “And Betty was still using it. It’s amazing the place didn’t burn down.”

Despite all the code violations, the house didn’t burn down and the logs, sheathed in wood and steel siding, didn’t rot. In fact, during the renovation Teri O’Rourke says that only one ground-level log needed to be replaced. The others – each hand hewn from local timber – were cleaned and brought back to the outside where they can show the deep cuts of an adz made more than a century ago by the craftsmen constructing one of the town’s first hotels.

But before anyone could see those beautifully hand-hewn logs, major work needed to be done, starting with two months of demolition, stripping the structure to its frame and seeing just what they had. “When you do a renovation, especially a historic one, once you’ve gutted it you kind of need to just sit in there and have a couple of beers and think ‘What are you going to do?’ O’Rourke says. “And it evolves from there.”

Because the building has such a rich history and lies within Crested Butte’s National Historic District, everyone knew they would need to take special care to preserve the original look of the building. Palhava, who also has experience serving on Crested Butte’s Board of Zoning and Architectural Review, which oversees historic renovations to ensure the history of the place is preserved, said one of the project’s major challenges was to rearrange the entire inside of the building and make it work without moving a single window. But she also lives across the street from the house and felt compelled to preserve its history because it was so special to the town.

“I just didn’t want that much to change and I do appreciate [the history],” she says. “This was really a dream project. It was Betty Spehar’s house and there’s so much history.”

But for all of its history, the house didn’t really have that much space. “When we first got in we didn’t know how big the house really was because … it was really old and the ceilings were really low,” Palhava says.

In order to create a stable foundation to work on and create more space for the house, they lifted the entire structure off its dirt footing and made room to excavate and pour a foundation.

From there, the entire building had to be rebuilt. Steel beams were added for structural support, three types of radiant heating systems were connected to a boiler, two bare electrical wires were replaced with modern wiring and the project was underway.

“Inside you would look up and these [beams] are what was holding up the whole bottom floor and also the top,” Palhava says. “So Peter repurposed those, we just stacked them in the yard and I put them as I wished on the plans and where they were needed structurally and we just made it happen.”

For more than a year they worked to straighten leaning walls and restore pieces of the building’s history.

The construction crew had found odd things jammed into gaps in the logs: a dress, old shoes, liquor bottles, containers of a powdery substance they didn’t want to learn more about. But along the way, they had learned something of the people who’d come before them and become connected to the history of the place.

Palhava recalls the door in the kitchen floor that led to the tunnel beneath the house where wine barrels and whiskey casks were stored and how it made the homes of early inhabitants seem a little more relatable. “I heard that’s where they would get the moonshine and the wine and everything,” she says. “It was really cool.” The O’Rourkes took members of the Spehar family through the house during various stages of its reconstruction, sharing with them things that were found or getting family artifacts related to the house.

That connection to the past was made even clearer on August 5, 2015, when the carpenters were cleaning the logs on the inside of what is now the master closet. Beneath the wall paper and decades of coal dust was a layer of newspaper pressed against the logs as insulation. When they brushed them off and looked closer, they saw the date of publication: August 5, 1882. Exactly 133 years separated the two craftsmen and not much more.

“It was really a labor of love,” O’Rourke says. “It was really important for us to not try to make it too perfect and just honor what was here.”

Each of the windows were removed, rebuilt by hand and replaced, protected on the outside by a new storm window. When the old mortar was removed, the pegs used to hold it in place were preserved and replaced, each in its original hole.

O’Rourke and Palhava say everything that could be reused from the original building, was reused and where new construction was required, it blends in a way that brings the history to the fore. The douglas fir floors still have dried drips of paint on them and scuffs from some long-removed object. And somehow they compliment the glass and marble encased steam shower perfectly. “I didn’t want a lot of trim,” Palhava says. “I wanted the house to be really mod, as clean as possible in the parts we were adding on. Because the logs were already so rugged.”

The attention to detail didn’t go unnoticed by BOZAR. The Board recognized the renovation as the 2016 Project of the Year.

With all the attention paid to the home’s history, it still has any modern amenity one might expect to find in a 3,200 square foot, six bedroom, five-and-a-half bathroom luxury mountain town house, complete with stunning panoramic views. It just has a whole lot more under the surface.

“It’s absolutely spectacular. They’ve done a wonderful job modernizing the house in a way that honors the history of it. The care that Peter took to preserve what was there was amazing,” Jim Spehar says of the family’s old home. “Each of those logs is individually hand hewn. It would have been a shame to do anything but preserve them. The house got what it needed.”