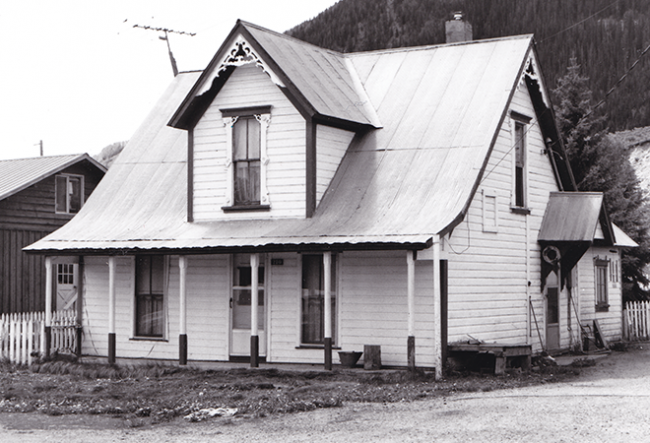 There are so many jewels in Crested Butte’s historic district, but one that stands out for Molly Minneman, the town’s historic preservation coordinator, is the house at 210 Whiterock. “It is one of my all-time favorite homes, not only because of its quintessential vernacular architecture, but because the Sedmak family were significant members of the community,” Minneman explains. “Rudy Sedmak was the kindest man.” Rudy worked the mines in the valley until they closed, then worked as an early lift operator.

According to the town’s records, the house was built in the late 1880s and was long associated with the Sedmak family. Rudolph (Rudy) came to the United States in 1904 from Austria-Croatia and became a citizen in 1917. His wife, Mary, was born in Crested Butte to parents from Austria/Croatia and attended school in town.

The couple raised their five children in the house on Whiterock. Their son, Joseph, nicknamed Cheech, lived his entire life in the house until 2005 when he died at the age of 90.

“This house is one of the best preserved of the dwellings erected during the late nineteenth century in Crested Butte,” explains Minneman. After the house sat on the real estate market for over five years, in 2015, local mother and daughter duo, Erika and Bailey Hosier, purchased the property and painstakingly rehabilitated the residence in place so that a piece of Crested Butte’s history still stands.

“We just couldn’t shake it,” says Erika of the Sedmak house on Whiterock. “We kept looking at it and realized we had such a big connection with it.”

So Erika and Bailey, along with help from an engineer and builder, began a ten-month long renovation. They gutted the house, giving the historic Crested Butte home a new life.

“You can feel the people who have lived there from the past,” Erika explains. “When we were working on the house, we could feel the people around us, especially the women. It was as though we were being helped along, encouraged. It felt really good to do this project.”

The mother-daughter duo spent day after day, sweating in their Tyvek suits removing coal dust from everything. But all those hours spent renovating the house are not lost on them. “It was the coolest thing we’ve ever done,” says Erika. “We would laugh, we would cry, we would sweat. But you’ve got to put your time and money where your love is.”

Bailey says one of her favorite parts of the house project was that there was still a double seated outhouse in the back shed that was used until the 1960s. They saved all the wood from the outhouse and turned them into the kitchen shelving.

“We need to preserve as many relics as we can. Preserve them in honor of the people who were here before us,” Erika says.

Bailey says that during the renovation, Rudy Rozman, Cheech’s nephew and the realtor who sold the house to the Hosiers, would visit them often at the house. They learned that at one time nine family members lived in the 1,100 square foot house.

“It seemed to be quite a central gathering place and I still feel that the house calls to be a communal space. A space for warm gatherings,” Bailey says.

Many old timers have come to visit and are elated upon walking in that the house is being taken care of.

Ben Somrak, a local builder, is the great-nephew of Cheech, and grew up spending many days at the Whiterock house. He has so many sweet memories of his grandparents’ house. “That front little sidewalk and roof was always leaning to the side with the snow. But it was always hanging on.”

Somrak says his great uncle Cheech was the last of a dying breed in Crested Butte. “Being at Cheech’s house was an authentic look at what life was like. His wood burning stove in the kitchen, his potato cellar underneath, that’s what life used to be like here.” 210 Whiterock was a gathering place for the Sedmak’s extended family. “There are so many good memories of everyone in the kitchen. It was the heart of that home. And so many good times were had in that backyard.”

Somrak was thrilled when the Hosiers bought the house and renovated. “I was really excited it was getting some love, especially that it was becoming home for a local girl who grew up here,” he says.

From the exterior color scheme of white with red and green trim, to the lace detail, Somrak is so pleased the house has new life, while still being an icon of Crested Butte.  “It’s such a quintessential Crested Butte house, a real classic,” he says.

There’s a heart at the peak of the house that was broken when the Hosiers began their renovation. They fixed the broken heart and painted it red for all to see.

“The house is so darn cute,” Erika concludes. “It’s full of character and so much love.”  •

For a closer look at Crested Butte’s history, take a visit to the Crested Butte Mountain Heritage Museum, or tag along on one of their walking tours during the summer.