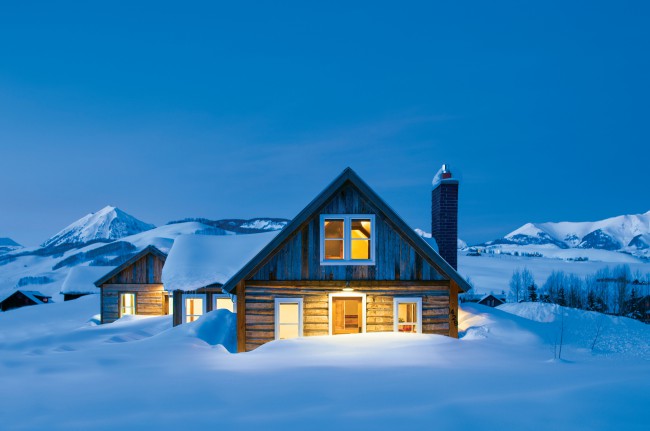 Renovating a House, Honoring a Home

This is a story not so much about a house that has been elegantly renovated—it has—but rather a home that has been expanded and modernized, continuing to provide an anchor for a longtime Crested Butte family.

There was a time, before the Crested Butte ski area took off, that the Kapushion house at Fifth and Gothic felt beyond the edge of town. It was known as the last house before the cemetery because there was not another building between it and the final resting place of miners and ranchers of old Crested Butte.

Today, that house feels almost like the middle of town, just a few blocks from the Old Rock Library. It continues to be home for another generation of Kapushions, the third, with another generation likely to take up residence when the time is right. And while the house you see today is very different from the one first built in the 1890s and updated in the 1930s and 1960s, it embodies a warmth of family and tradition that is felt immediately when you walk in the front door.

Sitting at the wooden kitchen table with Tina Meredith and Nettie Kapushion, the oversized window frames Crested Butte mountain like a painting. The sisters are welcoming and vibrant. They laugh and finish each other’s sentences as they recall growing up in a very different town and a very different house. Nettie, a former teacher at the Crested Butte Community School, and Tina ate at the table as children. Their mother, Ruth, used the sink that remains in the same spot today to prepare their meals.

While there remain elements of the house Tina and Nettie grew up in, the structure today has been renovated into an expanded home with all the modern conveniences.

The new in-floor heat is warm and the clean lines of the kitchen are comforting. The light fixtures are more modern and fun than you might expect in one of the old-timer dwellings of Crested Butte. The living room centerpiece is a big fireplace, a stone love letter between their parents, Tony and Ruth, who went on Sunday dates to gather the rocks to build it.

“Our hearts are here,” said Nettie. “It is a sense of place. It has a sense of family. It would have made us really sad to have to sell it. So Wayne [Tina’s husband, Wayne Meredith] knew about Willy and said we had to get Willy Miller. I emailed him and he said he was really busy. I think we waited a whole year while he finished another project—and it was worth it.”

“We basically built a new house inside an old one,” explained Crested Butte builder Willy Miller of Miller Custom Homes. “There were just a few things the family wanted to keep, like the kitchen sink and the fireplace. These types of projects can be challenging but they are really fun.”

About that fireplace and the chimney that were built with such love. It’s easy to see why they wanted to keep it. “Mom and Dad would go out in their old blue Chevy truck that Dad loved and collect rocks a little at a time,” explained Nettie. “So it was a huge project that spanned probably a year in the 1960s. They got the rocks from all over—across from the ski area, up Ohio Creek. They would bring them home and stockpile them. They were happy to do it because they did it together. They were 20 years apart in age but they were soulmates.

“Then they hired a crew from Montrose for the summer,” Nettie continued. “The crew lived in a little trailer by the barn and built the fireplace and chimney. And Mom cooked every single meal for them—with a smile. After it was done, Dad wanted to keep the moss on the rock alive, so for years he’d get out a little sprayer and spray the fireplace.”

Tony had roots in the house, which was originally constructed in the 1890s. “Our dad’s whole family grew up in the house,” said Nettie. “There were seven of them with two little bedrooms and a couple of closets. But that’s all they needed since they didn’t have many clothes. They had their work clothes and their Sunday suit and that was pretty much it. He was one of the younger boys. The others married and left and he stayed in the house.”

“And we were raised here,” added Tina. “And my kids were always here as they were growing up. Jodie and Whitney [Meredith] were always in the house with Ruthie. They’d come over from school with their friends. I’d come to pick them up after work and there were always five or six other kids. That was fun.”

Willy said that based on newspapers they found in the walls (originally used for insulation), an expansion appeared to have occurred in the 1930s. “We found old Denver Posts that referred to Hitler as Chancellor Hitler,” Willy said. “The kitchen we are sitting in and probably the second floor of the house were added on in the mid-1930s. Aside from the papers, we didn’t find much else. Some old tools. We pulled out some old jeans and burlap sacks probably used to stop cold drafts. There was a letter or two that slipped through the floorboards but no sack of gold coins.”

Ruth lived by herself in the home for many years and passed away in 2011. The family began discussions on what to do with the property. Tina said the house was not in good shape. “It was time to make a choice,” she said. “We either had to sell it or do something with it.”
“The renovation is a happy thing,” emphasized Tina. “It took a little over a year and was a joint effort. Jodie, who has a background in architectural design, did all the plans. She really enjoys historic preservation so she took it through BOZAR [the Board of Zoning and Architectural Review].

“Molly Minneman at the town was really helpful in explaining the rules and Jodie really enjoyed doing it. Plus it was a good price,” Tina laughs. “My other daughter, Whitney, lives here now and she was responsible for fixtures like the faucets and lighting. It was really important and it all turned out great.” Heidi Sherratt of Interior Visions was part of the interior design team.

The family wanted the fireplace and the kitchen sink to stay in the same place. “That’s where we always remember Mom working and cooking,” said Tina. “So yes, it still brings back warm and good memories.”

“It just has a good feeling. Of course Dad would go a little crazy because it’s so nice,” laughed Nettie. “He would have thought it better to spend the money on something like a tractor to work with. But ultimately everyone in the family agreed to keep the house and renovate it. And hopefully, I can pass it on to my nieces. That’s the plan.”

Before the latest renovation, the house was about 1,200 square feet. It is now closer to 2,200 with a 600-square-foot garage.
“With projects like these there are a lot of decisions made during the renovation,” said Willy. “There is no such thing as a strict plan. It is always shifting and changing on the fly.”

Willy cites as an example sitting in the kitchen one day during the renovation work, eating lunch. “I was looking at where the ceiling meets the wall in the kitchen. The rafters were pretty slopey so we wanted to straighten it out. We didn’t want to overcorrect and we had to keep it historical, so structurally we did all the things we had to do. What we were left with was a ceiling on the interior above the kitchen cabinets that was really crooked. Nettie and I were talking and I said we couldn’t leave the interior looking like that. The exterior was fine and it adds to the funkiness, but interior-wise we were able to fix that and make it look nice. Otherwise it would drive everyone crazy.”

“I remember that day and just loved that he could see an issue and fix it on the fly,” said Nettie.

Willy and his crew spent a year beefing everything up on the inside. New walls were constructed. Insulation was upgraded. In-floor heat was added. “It was basically building a new house inside an old one,” Willy said.

“And it is so much warmer and efficient than the old electric heat, for example,” said Tina. “When mom was here and older she really turned up the heat, so the heating bills were $400 a month sometimes.”

“It is a good melding of the old and the new,” said Nettie.

“A lot of people were involved to make this happen,” Nettie continued. “Willy Miller has just been perfect. He was very flexible and would put a lot of thought into making things special. He might see some of the old original logs and wonder how he could keep them. He would reuse things. We like that.”

“Willy was incredible with his detail and creativity,” agreed Tina. “It has a great feel now. When we were growing up there was so much stuff in the house. Generations of stuff all over—in the basement and the barn. This is so open and nice.”

“It was a joint effort for sure,” agreed Willy. “And it came out really nice.”

And that is why the newly renovated, much larger, much more open and much warmer house remains rooted in history, a true family home for the current and next generation. The barn, known as the dynamite shack, is still out back. There are still coal remnants in the basement but there are also hip light fixtures throughout the house. The fireplace still tells a love story, and there are other stories that get told over the kitchen table.

Stories of how the family owned Tony’s Tavern (now the Wooden Nickel) for 17 years. Stories of ranching, of working in the Big Mine and giving horseback tours. Stories of their dad working the old homestead cabin up Washington Gulch and their mom walking lunch up to him because that’s what people did back then—everyone worked all the time and they walked everywhere. Stories of townspeople digging up spuds from the family potato patch and letting Tony know at the bar. Stories of people socializing at Tony’s Tavern and after drinking a few beers throwing pennies at the back wall for fun, which meant the family had boxes of pennies after the Tavern was sold. Stories of adjusting to the new town when the ski area opened and their dad enjoying the changes and hiring the new hippies to help him hay the family’s field.
Nettie and Tina said they too appreciate all the changes that have come to Crested Butte. “It’s better than having a mine,” said Tina. “It’s a much easier life than having a mine and digging coal. It’s a fact of life you have to make a living, and tourism is a cleaner, better way.”

So while the house has changed—sort of like the town in that it’s gotten bigger and nicer and easier to live in—it remains a family home. Four generations have ties there. “This house is sort of like an anchor to the family history,” summed up Tina. “I think all of the generations before would be glad that we did it.”

“It is wonderful,” said Nettie. “Willy Miller made our dream come true.”