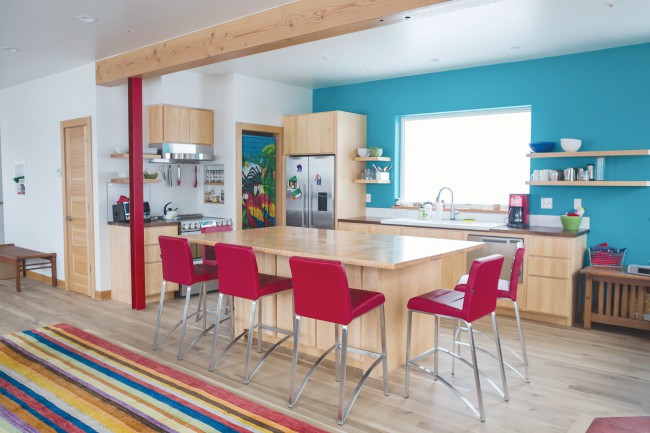 When you walk into Erika Vohman’s all-electric “net zero house,” the first thing that strikes you is the peace and quiet—no boilers running, no hot air blowing from the furnace. The second thing that strikes you is that it’s warm and cozy and full of natural light. And the third thing you think is, “This is a house, but it is also producing its own energy. It is also a mini-utility company.”

Net zero means the home’s solar panels will, over the course of a year, produce at least as much energy as is consumed by the home’s occupants.

Her home stands out for what is present but also for what is absent: There’s a roof full of solar panels and no  natural gas line and boiler.

“I can’t even tell you how happy I am not to have a gas line,” she says. “It feels independent and liberating and non-toxic.”

Dave DiBerardino of Monsoon Construction built the house with energy efficiency at the forefront of every decision and completed construction in March 2018. The walls and roof are insulated well beyond code requirements and the windows, while abundant, are also above code and many are “fixed,” not opening, to prevent heat transfer. That is important in this Riverbend neighborhood just south of Crested Butte where cold winter air collects and lingers.

“In addition to the interior insulation, the entire house is wrapped in a thermal envelope outside the framing and that stops leaks,” says DiBerardino. “In a perfect world, everyone could build their homes this way. Think of the energy savings over 100 years for this home.”

To capture the full benefit of the solar photovoltaic (PV) panels, there are three electric hot water tanks in the basement that act as batteries to store energy. When the sun is shining, the PV panels heat the water; at night, that water pumps through the floors of the 1,650-square-foot house as a heat source. The PV system is still tied to the electric grid, however, so Vohman could draw on that power if needed.

“At the end of the year, Gunnison County Electric Association [GCEA] will look at how much power I consumed and how much I produced. That is called ‘net-metering,’” says Vohman. “I will either owe money or, more likely, I will get a credit for my production.”

“In a perfect world, everyone could build their homes this way. Think of the energy savings over 100 years for this home.”

The photovoltaic system is a 6.7 kilowatt system installed by local company Nunatak Energy Systems; it should produce nearly 900 kW hours every month. According to GCEA, average customers in the Gunnison County use 750 kW hours each month, so Vohman’s system should be more than enough to supply her needs.

“GCEA makes it easy for the average Joan to build a net metering system. In some places around the country, electric companies are trying to shut down net metering, but GCEA has been very supportive. It just cost an extra $500 for the net meter to be installed and that was it,” says DiBerardino.

“I can watch online at SolarEdge and see real-time data for my panels,” says Vohman. “It shows me how many kilowatts my panels generate and the CO2 emissions that are saved from that and the equivalent of trees planted as a result.”

That carbon emissions reduction was a catalyst for Vohman to build this home and for DiBerardino to build it.

“Living in this house with all the electric power solely from solar cuts my carbon footprint and that feels good,” she says.

“You have to believe that clean energy is the future. You’ve got to look long-term and think of the energy savings over time, over 100 years,” says DiBerardino. “The up-front cost is more but she will earn that back over time.” 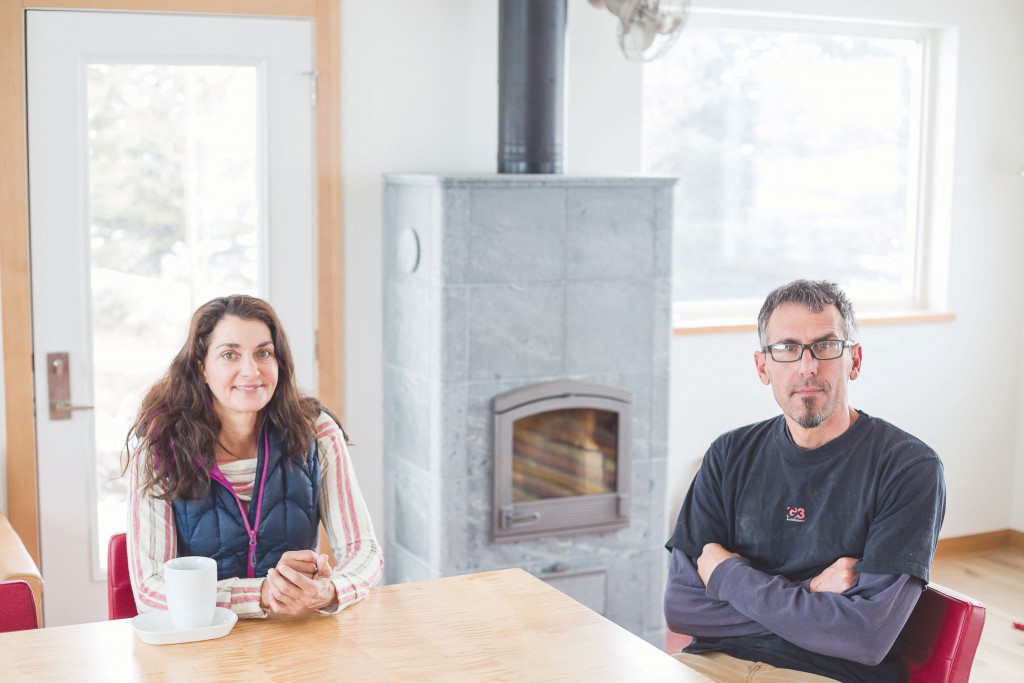 All told, the extra cost for the solar panels, the thicker insulation and the higher-performing windows increased the overall cost of the house by 5 percent or 6 percent or approximately $30,000, according to DiBerardino. Factor in the fact that Vohman did not pay to install a natural gas line or a boiler and assuming $2.000 a year in gas and electric utility costs saved, she could re-coup her costs in 15 years. She will also receive a federal rebate for some of the cost of the panels, approximately $8,000.

Because of the large PV panel array and its kW capacity, Vohman’s house will more than likely produce more energy than she consumes this year. If that happens, she plans “to either put in a hot tub or get an electric car.”

“In some solar houses, residents have to be careful about the timing of their energy use so they plan their showers and dishwashing during times when their panels are producing,” says DiBerardino. “But the design of this house and the solar capacity provide enough of a buffer that she can live ‘normally’ without having to adjust her habits. She can shower and run the dishwasher at night.”

In addition to the hot water tanks, a state-of-the-art Tulikivi wood-burning masonry stove sits front and center in the home’s main room. Thousands of pounds of soapstone envelop the stove and act as a long-lasting furnace, radiating heat long after the fire is extinguished.

“Feel the stones. They are still so warm and I haven’t had a fire in it since last night. It is still radiating the next day. This will be my heat source for most of today,” Vohman says. “The stove is one of the key elements for this whole system to function.”

“I wish that everyone who could afford to build this way would do it,” says DiBerardino. “That would go a long way to helping our climate and the future for our kids and the planet.”

“You have to believe that clean energy is the future. You’ve got to look long-term and think of the energy savings over time, over 100 years.”

Thoughtful design features throughout the house center on sustainable, energy efficiency. South-facing fixed windows capture passive solar gain and a minimum number of doors limit air leaks. The kitchen cabinets were all constructed by local valley carpenters; nothing was outsourced. The lighting in the entire house is low-wattage LED, so 6-watt LEDs replace 60-watt halogens. And the house is so tightly constructed and insulated that it needs a heat recovery ventilator to mechanically bring in fresh air when the windows are closed.

But the house is more than just an energy-efficient mini-utility company; it is an eclectic modern home bathed in warm neutrals with splashes of color throughout. It lives and feels like a clean, modern space with few interior walls and unparalleled views of mountains in every direction.

Unusually, there are two electric breaker boxes—one tied to essential appliances such as the refrigerator and hot water heaters—and the other tied to non-essentials such as lights, computers, coffee machines, etc. When she leaves the house, she turns off the breaker for non-essentials to prevent appliances from drawing so-called phantom loads of electricity simply by being plugged into the wall socket.

“Phantom loads waste enormous energy and I have a simple solution. Instead of unplugging everything in my house every time I leave, I turn one switch,” says Vohman.

“Some people worry that a solar house will be too hot in the summer, but the thermal mass of this house works both ways,” says DiBerardino. “In the summer when you wake up and it’s 55 degrees, you close the windows to trap that cold nighttime air. The large thermal mass keeps that temperature constant through the day. It won’t get too hot, even with all the passive solar gain.”

So for those who think a life beyond natural gas is impossible or prohibitively expensive, Vohman’s home is proof positive that it can be done. With the right materials and design, even in this cold mountain climate, you can live off the sun, and that feels like a good thing to do. •