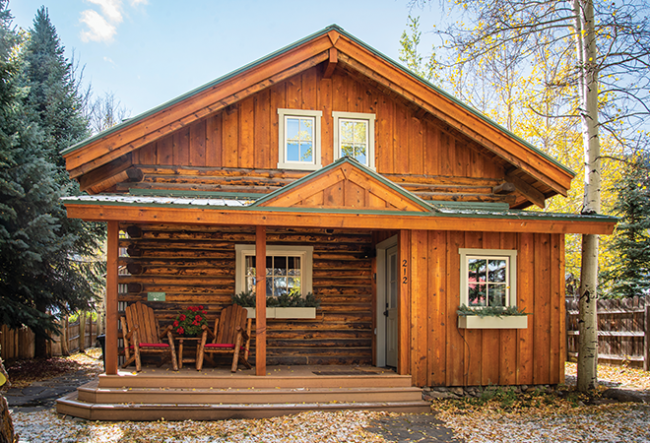 After a chance drive down one of their favorite streets, a long-time local Crested Butte family decided to purchase a cabin on Sopris Avenue several years ago. They noticed a for-sale sign in front of one of their most treasured houses in town.

“You can tell pretty quickly if a house has the feeling you’re looking for, and as soon as we walked in the door, we could tell it had that feeling,” says the homeowner. “When we first walked in, it was as if the house gave us a hug and was saying it’s happy to see us.”

The cabin, originally built in the 1970s, had many owners over the years and was in need of some major TLC. New additions came with each owner, but the cabin was showing its age and needed some real structural improvements.

Once it was determined that a steel beam could solve numerous issues, the new homeowners were elated.

“We realized we could create something really cool for our family,” the homeowner explains. “We had the opportunity to revive it, bring it back.”

By giving the house new support, they were giving it more life. The couple started by reconfiguring the interior, mainly opening up the living room and replacing the old pot belly stove with a modern, metal-clad fireplace.

“We wanted to modernize it while still retaining that old cabin feeling,” say the homeowners.

Once work began, people started to stop by, telling stories of when they once lived there, or played there as a kid.

“There’s a lot of local history in that house. It was just a teeny house when it was built but added on to over the years. There are so many locals who have stories about this house,” the homeowners explain.

The original house on that lot, built in the 1890s, was lost in a fire sometime after 1950. However, the historic barn with its steeply pitched roof gable still stands in the backyard and is estimated to have been erected between 1900-1904.

The backyard is one of the most exquisite in town. Gorgeous flower beds surround the large historic barn. The story goes that the barn was brought down from Irwin at the turn of the century. Previous owners put a new concrete foundation under the barn, and the newest homeowners hope to one day give the barn a new life as well.

Back inside, there are new modern touches throughout the cabin such as the metal surround on the fireplace, a metal I-beam in the kitchen and gorgeous metal railings, created by local blacksmith John Murphy.

The homeowner wanted to keep the colors consistent throughout the house. The walls are all a taupey grey, Benjamin Moore Pashmina, that are easy to live with and work in all lighting conditions.

The installation of several types of lighting provide one more way to further the cozy feel. From modern track lighting in the kitchen to unique lamps in the living spaces, it’s always comfortable, whether it’s summer or winter.

The result is a house that feels comfortable and inviting with its approachable furniture and décor. With its red geraniums popping off the front porch all summer long, it’s ready for many more years of memories to be made there.