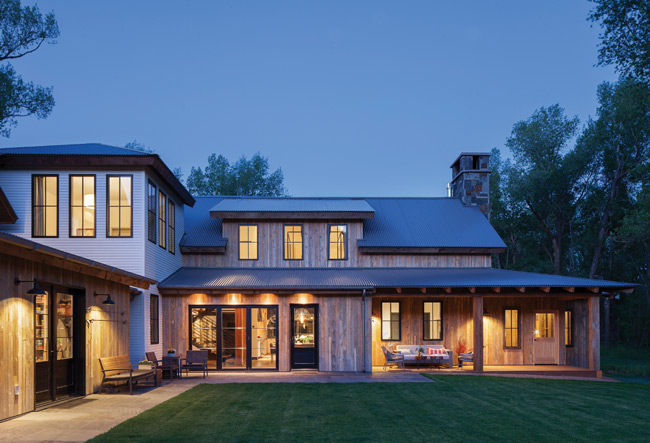 Looking in any direction from Highway 135 between Almont and Mt. Crested Butte, you’ll likely see a house or cabin. Some are more visible than others and one of the best sits close to the highway but hidden behind the trees that line the East River about 10 miles south of Crested Butte.

Bill and Annie Coburn’s sprawling 6,600-square-foot riverfront home, nestled directly on the banks of the East River within Danni Ranch, always has something going on within its fabulous walls (the exterior ones happen to be built from reclaimed snow fences). On any given day, the grandkids are playing in their tree fort bunkhouse room, Annie is working from home designing interiors for clients of Coburn Partners, or Olympian daughter Emma’s training team is working out in the garage that converts to a gym when she’s home. On other days it’s much quieter, allowing for the din of the river to take over the acoustics of this idyllic setting cushioned with willows and cottonwoods, and embraced by a rolling meadow. Year-round, the gentle clucking of broody hens punctuates the silence. In the autumn months, bugling elk make their presence known. The home taps in to the energy of the surrounding mountains, and the homesite itself looks plucked from a scene in a Western movie, or a romantic storybook.

“The kids love it, we enjoy it… It’s been really, really fun,” Annie says of the house that has become their full-time home since its completion in 2017. Bill and Annie – both Colorado natives – worked in tandem to design and construct this dwelling place that will house the next chapters of their family’s story. When they began building the five-bedroom, four-and-a-half bath, two-story home in 2016, only one of their four children was still living at home. At a stage in life when most parents would be dreaming of an empty nest, the Coburns were considering ways to keep theirs filled, and how best to accommodate the future needs of their grown children and grandchildren. “We could have made it double the size and still have it filled all of the time,” Annie says.

On a mid-afternoon tour, Annie shares the family stories that go with the adornments and mementos integrated into the décor of the home. The house, though only four years old, is curated from the life the Coburns have built over three decades and is simply packed with family memories. Even before entering, the front door showcases Bill’s grandfather’s collection of arrowheads and other artifacts scavenged from an old family homestead on the Eastern Plains. Each room has a “wow” element to draw the eye and intrigue the senses. Initially, it’s the massive amber-colored rafters crossing the ceilings. In the living room, the centerpiece is a dramatic burnished metal floor-to-ceiling fireplace made by local blacksmith Jeff Brethauer. His touches include the staircase and handrails leading to the second floor, and lend a modern flare to an otherwise rustic interior. The kitchen’s focal point is a giant island topped with Royal white quartzite. But naturally, Annie says it’s the smallest room in the house – the Butler’s pantry – where people congregate during dinner parties and other get-togethers. The entire house is a seamless merging of rustic and modern, and is as easy on the eyes as the river meandering past the cozy back porch.

Features like a hunting and fishing room store equipment for two of the family’s favorite shared pastimes. A collection of antique shotguns lines one wall, while rods and reels line another. “We love to upland hunt and trap shoot,” Annie says. The house’s walls have multiple trophies and photos from family hunts to prove it. Annie introduces their Labrador Retriever Boo via photo – he’s at work today with his dad – but he smiles from the hunting photos too and is clearly regarded as a family member.

Multiple outbuildings have sprung up on the spacious 35-acre ranchette, which include a greenhouse to extend the minimal high-country growing season, a henhouse to enable year-round farm-fresh eggs, and a garage to house oodles of gear and recreational equipment. The Coburns literally have ALL of the toys and tools that one might accumulate while living in Colorado. There’s even a homemade Zamboni to groom ice on a small pond for ice-skating in the winter, and a snow groomer to prepare the meadow around the house for cross-country skiing.
The garage also houses a reminder of Bill and Ann’s first date – the Jeep he drove to pick her up.

They still cruise it around the mountains near Tincup, where Bill’s grandfather established a cabin in 1918.

The changing needs of the family have already prompted alterations to make this magical space even more livable. The wrap-around porch was so well-loved that they enclosed it to enable three seasons of enjoyment instead of just one. “This is the perfect spot for morning coffee or afternoon wine,” Annie says, clearly eager for the warm summer months ahead. Originally an office, a second-floor room had such a lure with its nearly 360-degree views that the adult children petitioned for its conversion to a guest bedroom for their frequent visits.

With each passing month, it seems that both Annie and Bill become a little more grateful they expanded their home space when they finally built on the lot they had owned since 2000. When the COVID-19 pandemic hit, it changed the path two of their adult children were on. Uncertain about the option of online classes, their son Joe took the Spring 2021 semester off from college and moved back home to work with his father. The year-long hiatus in global travel also brought Emma back for a large portion of 2020. With the 2020 Tokyo Summer Olympics pushed to 2021, Emma and 14 other athletes relocated to the Gunnison Valley to train for seven months. “I’m especially glad we’ve had this space,” Annie says. The house has provided sanctuary during a particularly tumultuous year and proven its value to the family as a true home.