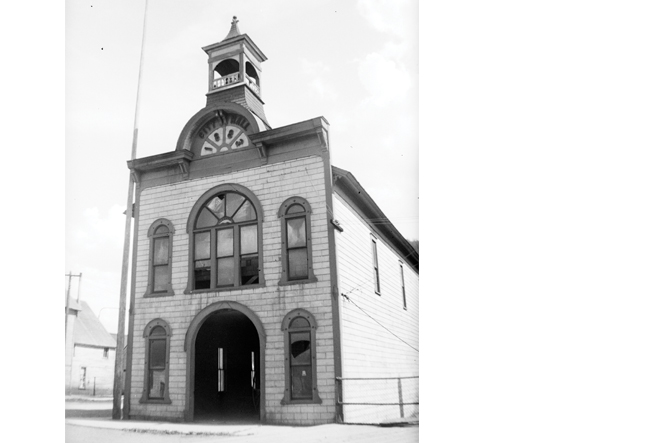 In 1883, as a new mining town was growing, a community building was built at the corner of Second and Elk that would become an icon of Crested Butte.

Local builder, Jacob Kochevar, Sr., who had emigrated from Yugoslavia, designed and constructed Crested Butte’s City Hall to not only be the meeting place for the new town government, but also house the town’s fire department. The vernacular wood-frame, Italianate building was completed on December 18, 1883.

Old Town Hall, as the building is affectionately referred to today, is one of Molly Minneman’s favorite buildings in town. And Minneman knows her local historic buildings as Crested Butte’s principal planner.

“The building’s architecture is charming with its bell tower, an iconic feature of town’s important buildings,” explains Minneman. The bell in the bell tower was used to announce meetings/alert the community to fires.
She also loves the unique Palladian divided light windows, along with the building’s north facing arched doors.
The north façade is so well loved, it’s even part of the official logo of the Town of Crested Butte.

According to the town’s historic buildings record, the building is representative of late 19th Century town hall/hose house buildings erected in Colorado. The arched central opening originally provided the egress for the fire department’s hose carts.

The town was incorporated in July of 1880 with a population of 400 residents. Two years later, the town’s population had grown to 1,000 residents and Elk Avenue was becoming a real Main Street, with five hotels, a bank, saloons, restaurants and more offices.

“Situated on the southwest corner of Elk (Main)  and Second Street on, the building was central to the Town during the mining era (1880-1952),” explains Minneman.

“The building saw many a miner walking to and from work along Second Street on their way to the Big Mine tipple (near the Nordic Center) and staircase (between Second and First Streets) that they climbed each workday to gain access to the industrial buildings and mine entry located on the Bench beneath Gibson’s Ridge.”

This icon of a building was almost lost to a fire in 1893.

From Duane Vandenbusche’s Gunnison Country book: “Even more than most mining towns, Crested Butte was continually afflicted with that most dangerous early day scourge – fire,” writes Vandenbushe. “The wooden buildings, presence of coal, abundance of explosives, and continually freezing water lines made the town extremely susceptible to damaging fires.”

On the morning of January 9, 1893, a disastrous fire swept down Elk Avenue. “Frustrated firemen found the water lines frozen and were unable to stop the spread of the blaze which proceeded to destroy all of Elk Avenue.”
“In a desperate effort to halt the conflagration, firemen blew up A.E. Miller’s furniture store, but used too much dynamite. The 150 pounds of explosives tore a gaping hole in the city hall and broke nearly every window in town.”
The dynamite blast did stop the blaze.

The town’s City Hall building was repaired after that explosion and continued to be a community hub, governmental meeting place and hose house. Church services, community dances, and public meetings filled the building for decades. In 1952, the town’s government offices were moved, but the fire station remained until 1974.

Over the years, the town has rented the building to various organizations. Today’s long standing tenants are the Paragon Gallery on the first floor and the Crested Butte Mountain Theatre on the second floor.

The two-story red and white building is one of the most ornate and well-preserved buildings in town.

Minneman recounts the building’s major rehabilitation in 1992. The Town of Crested Butte hired Vogy’s house-moving company out of Montrose to pick up and move Old Town Hall to Second Street, while a much-needed foundation could be constructed. Interior rehabilitation commenced, a new addition was constructed on the east side of the building, which housed the marshal’s office at that time. The building was given new life.

The red and white icon stands strong on Elk Avenue, continuing to be a symbol of Crested Butte’s early days. With the words “CITY HALL 1883” proudly displayed above the doors, there’s no doubt the nod to the past will be remembered.