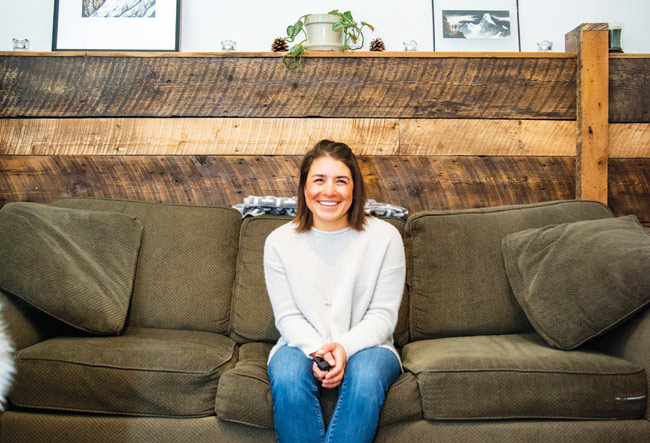 For many people, living in a tiny space may feel uncomfortable or cramped. But for Lani Bruntz, it’s taught her life lessons in simplicity.

Last summer, Lani who is 31, signed a lease to live in a 300-square-foot former coal shed in an iconic Crested Butte alley. Despite living in Crested Butte for four years, it was the first lease she’d ever signed in her life. Until now, she’d found temporary housing situations that allowed her to freely travel for months at a time each off season.

But now, she is grateful for her lease and her space. Like most locals, she stumbled upon the place through word of mouth. “I found it through a friend who made it a very centered and healing space,” says Lani. “She wanted to pass it on to someone she knew.”

Lani works as a guide for Irwin Guides during winter and summer. She is also a Crested Butte Devo coach, teaching young local mountain bike riders how to rip. For Lani, the best part about the guiding life is being outside every day and connecting with guests. “I love learning about new people, or strengthening relationships with return guests.”
In addition to her guiding work, Lani is also an athlete and brand ambassador. She represents companies like Salomon, Ergon Bike and Revel Bikes. She grew up in Vail as a Nordic ski racer, which eventually took her to the East Coast to race at the collegiate level. After college, she continued to race in a variety of adventure sports.
Today, her interest in racing has waned. Instead, she loves to get out on long adventures. “Now I’m way more drawn to long adventure bike rides or skis,” she says. “I love to put together my own ‘sufferfest’ that doesn’t have a timer.”

Life in a 1920s Coal Shed
Lani’s 300-square-foot coal shed is a piece of Crested Butte history. The property was built in 1923 by the well-known, old-time Crested Butte Sporcich family. Back then, a horse drawn coal cart would travel Crested Butte alleys, and workers shoveled coal into the building through a window.

The current owner purchased the property from the family, and then worked with a local company, Blueline Builders, to restore the shed into a small living space. Renovations literally involved lifting up the entire shed with a crane to pour a new foundation.

The shed is plentiful: it has a full kitchen, a loft for sleeping and the appliances are modern and stylish. There are also many perks: Lani pedals two blocks to work (with skis in tow during winter), she keeps tabs on the line to Camp 4 Coffee by looking out her window and a trip to her P.O. box is a quick skip across the street.

She is grateful that her landlord prioritizes local housing in what has become a challenging market.

Despite living alone, Lani is comfortable and rarely lonely in what she refers to as her “hidden nook.” The space is cozy and small enough that it “hugs” her. She wonders if her comfort is size dependent – after all, she’s five foot one and a half. “Maybe it’s not a space normal-sized humans might enjoy?” she says laughing.

Tips for Living Tiny
Lani is no stranger to living in tiny spaces. In her early 20s, she lived out of her Subaru with her then partner for two years. Soon after that, she upgraded to a van for another two years. These experiences helped her learn how to live comfortably in a tiny space. “We fully lived on the road, so we just had to be ready for anything,” she says.
For Lani, living in a small space requires learning to live with only the essentials. For her, this includes a versatile pair of shoes and wool clothing that requires infrequent washing. Lani is proud to say that she’s carried these principles into her everyday living.

The 300-square-foot coal shed is an upgrade for Lani, but it still has its challenges. Here are her tips for staying comfortable while living tiny.

Stay Organized
Everything needs to have a place. “I’m a piler, so it can become a mess real quick.” Lani is happy that cleaning takes no time at all, but she is quick to admit a mess can happen just as fast. But with adequate amounts of cubbies and baskets, she manages to keep things organized. Sometimes it can be irritating, after a long day at work it can be nice to come inside and drop everything to the ground.

“[Sometimes] I walk in the tiny entry way and I’m covered in snow, and I don’t have a place to drop things and move on.”

Sort Gear Seasonally
As a ski guide and athlete, Lani has a lot of gear. Depending on the season, she shifts between six bikes and 10 pairs of skis. The key to organizing gear is—well, organization. Lani is grateful for her underground storage space, but she only keeps the most important pieces of gear inside each season. For now, she’s ski focused. “When spring comes, I’ll bring out ropes, crampons and other ski mountaineering gear.”

Small essentials include plastic mats to catch moisture and water from her snow-covered boots and skis. When needed, she’ll use her car’s rocket box for extra ski storage. Her landlord, who is an avid mountain biker, lets her store her bikes in his shed protected from the summer mountain rainstorms.

Furnishing Through Creativity
Since this was Lani’s first time signing a lease, she didn’t own decorations or furniture. So, she did what any Crested Buttian would do—she found free stuff around the streets and alleys in town. “I’m so cheap and frugal,” say says. “Everything was found on the street for free.”

One day while walking the two blocks home from work, she found a sofa bed on the corner with a ‘free’ sign. She immediately called her friend who then called another friend, and within 10 minutes, they were loading the sofa into a pick-up truck. Soon after, it was nestled into the coal shed. The sofa bed is essential for hosting guests, as the loft where Lani sleeps is only big enough for her.

Purge Often + Live Only With the Essentials
“I only keep stuff I need and use.” Lani has a lot of gear. A lot. When work and personal life revolve around being outside skiing and mountain biking, it’s hard not to have a lot of gear. Lani makes an effort to purge often. Each season, she gets rid of a few boxes.