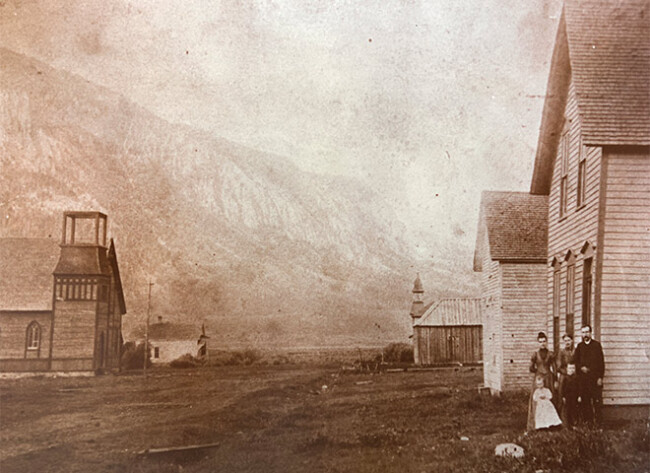 In the spring of 1882, just months after the railroad came into this brand-new town, a group of founding families started building Crested Butte’s first church, the Union Congregational Church (UCC) at the corner of Fourth and Maroon. It’s Gothic style architecture, open cupola with cutouts and arched windows were built to be beautiful (and unlike anything else in Crested Butte), but were also built as signs of hope.

Molly Minneman worked as the town’s principal planner for 28 years and recently retired. She oversaw the town’s historic preservation efforts. “Crested Butte was laid out as a little Victorian town, a supply town with high hopes there would be silver and gold.”

As the cornerstones of the new supply town were built—the train depot, the schoolhouse, the town center and the first church—these buildings all reflected the hopes and dreams of the new miners that the community would flourish.

In the early 1880s, most of the miners and their families had an affiliation to church, the majority of them Protestant and from Great Britain. So, in the spring of 1882, work began on UCC as the Crested Butte Protestant organization was founded.

According to a written history of the church by Lyle and Mildred McNeill, written in 1979, the main structural beams in the Church were all hand hewn on the building site. “There are wood chips under the church to support this,” they wrote.

Minneman points out the uniqueness of the building. “It features white clapboard siding with colored trim, an iconic bell tower, arched windows and doorway, and decorative woodwork.

“It’s one of a kind,” says Minneman. “There are no others like it in Crested Butte.”

Interestingly, the bell tower took several years to complete and the original bell that was installed cracked, so in 1917, a new one was brought in from the Irwin townsite.

Originally, the Church building had a front vestibule that was later moved to the rear and converted into a coal shed and outhouse. There were no pews until 1961 when the present hand-carved pews were purchased from the old Catholic Church in town. The pulpit and communion table, also hand carved by Holyes Hand, and the stained glass rosetta by Robin Grabowski, were donated in 1975 by the Ralph Walton family. The seven identical stained-glass windows in the church were the gift of Helen Morgan in 1983.

The McNeills wrote: Prior to its completion, Protestants of all denominations held church services in a frame schoolhouse. Until the 1890s, Protestants outnumbered Catholics in the town and the congregation was large. For several years, the congregation had a fulltime minister. After 1915, the church was unable to afford a fulltime minister and preachers from Gunnison were then assigned to visit the church. This decline reflected the falling number of Protestant workers from Great Britain who originally predominated in CB’s coal mines, and the rising population of Catholic miners from Easter Europe. During the summer, Congregational ministers from the region were housed behind the church in exchange for Sunday services.

After the big mine closed in the early 50s, the McNeills, along with several other families worked hard to take care of the church. It wasn’t until 1984 that UCC hired its first full time minister in 60 years.

In 1992, current minister Tim Clark started his tenure. “I remember the first time I walked in, it felt very homey. It didn’t feel institutional, it felt like this [congregation] was a family that shared their spiritual home here,” he says.

Before moving to Crested Butte, Clark was an architectural woodworker in New York City. “My first week on the job, I was rappelling off the bell tower with my climbing gear on dealing with a problem on the building.”

In 1995, the church received a grant from the Colorado Historical Society to restore the historic building. Clark explains that they brought the exterior of the building back to its original look. A team of carpenters, including Clark, put the entry back on the front of the church. They also put a new foundation under the building.

Clark says one of the most amazing parts of that rehab project was restoring the church to its original paint color. They sent actual paint chips from the wooden trim to the historical society lab, whose team performed solvent washes until they figured out the first color, a vibrant purple. In years prior, the trim had been yellow and a light pink.

Minneman is grateful to all of the members of UCC who over the years have watched over the historic structure. “I’m grateful for all the people who have cared for it. They have helped our history thrive,” she says.

Yet under their care, the church is not just historic but continues to be part of the cultural fabric of Crested Butte. For Clark, it is a place of connection, community and worship.

“It’s been a place to gather and reconnect…It’s one of the places we come and renew our sense of being a family,” he says. He sees it as one of the reasons Crested Butte is a resilient and bonded community.

“If these walls could talk, I think they would tell us, ‘Don’t be afraid of being a prophetic voice to the community.’”